Proclamation and exaltation in Grassendale Chapter

Members of Grassendale Chapter No 4808, held their annual installation ceremony at Woolton Golf Club. The business for the evening was to proclaim the three principals for the coming year and to exalt Oliver Leach, a member of Old Lerpoolian Lodge No 9270. 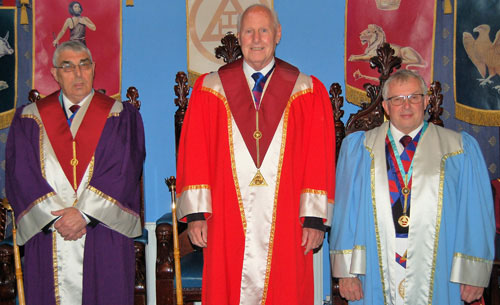 Pictured from left to right, are: Fred Hulse, Brian Boyle and Mike Cunliffe

The three principles arose and extended a very warm welcome to Tony. The ceremony of proclamation commenced under the direction of the chapter DC Peter Williams. Peter then proclaimed Brian Boyle as first principal, William Pinto as second principal and Steven Cornwell as third principal, after which they invested their officers for the coming year. 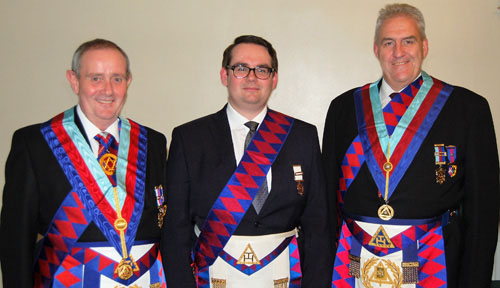 Pictured from left to right, are: Tony Hall, Oliver Leach and Andrew Whittle.

On the conclusion of the installation ceremony, Tony expressed both the best wishes of the Grand Superintendent Tony Harrison to the three principals and his congratulations to all the companions that took part in the installation. Tony was then presented with a cheque for £200 on behalf of the chapter to the WLFC. Tony then took his seat for the exaltation ceremony.

Brian Boyle asked John Leisk to occupy the first principal’s chair for the exaltation. John then asked Brian Humphries to retire and entrust the candidate, after which Brian re-entered the chapter with the candidate and the ceremony proceeded. Oliver Leach was exalted in a dignified and sincere manner by John Leisk.

At the completion of the exaltation ceremony, Oliver was then taken to a position in the west, where John Leisk gave a flawless explanation of the five signs.

The ceremony of exaltation being completed, Brian Boyle resumed his seat as first principal. The three principals congratulated Oliver and welcomed him formally into the chapter, hoping he would have many happy years of companionship in the chapter. Woolton Group Mentor Ian Mc Govern congratulated Oliver and wished him well in his Masonic career and gave him a welcome booklet on behalf of the Woolton Group.