Centenary at Lodge of Tranquillity

Brethren and guests of Lodge of Tranquillity No 3877 met in the Geoffrey Hirst Masonic Suite at Woolton Golf Club to celebrate the lodge’s centenary. The principal guest for the evening was Deputy Provincial Grand Master Philip Gunning, who for the purpose of the ceremony was appointed as acting Provincial Grand Master. 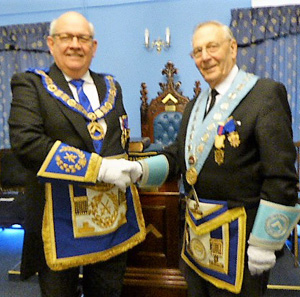 At the appointed hour, the lodge DC David Boyes requested brethren to stand to allow the WM Alan Samuel Carter and his wardens to take their places in the lodge. After warmly welcoming the brethren the WM opened the lodge to the first degree so that the secretary could read the dispensation for the meeting, as this was not their usual meeting night but was the anniversary of the consecration of the lodge in 1918. The lodge was then opened in due form to the second and third degrees.

The Provincial Grand Director of Ceremonies Keith Kemp was admitted and informed the brethren that Philip Gunning stood outside and demanded admission. He was accompanied by other grand and acting Provincial grand officers. In ceremonial form the team entered the lodge and Alan Carter welcomed Philip, who then occupied the master’s chair. 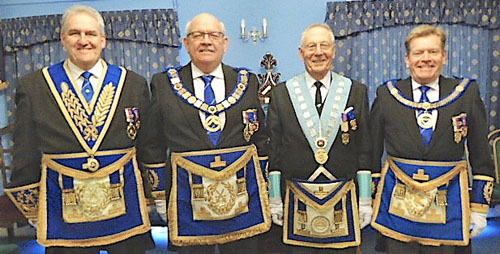 The PrGDC gave the customary salutations to Philip and then to Robert Wright. Provincial Deputy Grand Director of Ceremonies Ian Halsall gave salutations to David Hawkes, Andrew Whittle and all the other grand officers present. Customary greetings were then given to John Karran as Provincial Senior Grand Warden, which he accepted on behalf of all the Provincial brethren present.

Philip then closed the lodge to the first degree and outlined the purpose of the meeting, which was to celebrate 100 years of the uninterrupted working of Lodge of Tranquillity. He was indebted to the Grand Master for allowing the centenary warrant to be struck and called upon the Provincial Grand Secretary Peter Taylor to read it. Philip then presented the warrant to the master of the lodge Alan Carter along with a centenary jewel. 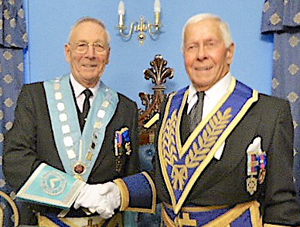 The Provincial Grand Chaplain Godfrey Hirst was called upon to deliver an oration in which he referred to the lodge banner, saying that it was only four years ago that he had been present to dedicate it. In his oration Godfrey referred to the predominant colour in the banner of green, which signifies peace and tranquillity and as Cicero said: “Peace is Liberty in Tranquillity.” Godfrey was thanked by Philip for his eloquent oration and was asked to rededicate the lodge.

The Provincial secretary was asked if there were any other matters, he then read out a proclamation from the PrGM for the promotion of Alan Carter to PPrJGW, to the acclaim of the brethren, after which the Provincial Grand Lodge was closed with one verse of the National Anthem.

Following the conclusion of the celebratory proceedings, Alan Carter was asked to reoccupy the master’s chair. Alan Sale was then asked to provide a short history of the lodge, which he did by reading the minutes of the first meeting, saying that the lodge had been formed by strong founders to celebrate the end of the war. The founders of the lodge were named and the ceremony was outlined.

Alan Carter thanked Philip and all Provincial grand officers for attending and for making it such a memorable ceremony and ended by presenting a cheque in the number of the lodge, namely £3,877 in favour of the MCF 2021 Festival. This was received with great enthusiasm by Philip who said it was a magnificent sum for such a small lodge and it would go a long way in making other people’s lives better.

Kevin Poynton then presented a certificate for the lodge which affirmed that they were now Grand Patrons of the MCF 2021 Festival.  A collection for charity was taken which raised the sum of £184.

At the festive board, where a celebratory seven course meal had been prepared, 65 brethren continued with their celebrations. It fell to Kevin Poynton to propose the toast to Philip Gunning, who in his response thanked all the Provincial team for attending and explained that the PrGM Tony Harrison had been asked by London to attend elsewhere but he sent his warmest congratulations and very best wishes to the lodge. 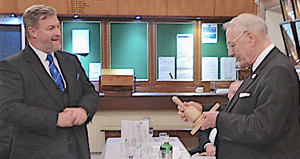 David Boyes presented Alan Carter with a commemorative gavel and then called upon Fred Hulse for another presentation. Fred informed Alan that for some time he had been searching far and wide for a founder’s jewel and having contacted the great grandson of one of the founders he had obtained one.

In his response, Alan gave further background to the members of the lodge saying that five of the founder members became masters, the first in 1918 was Arnold Rushton, who two years later was knighted and two years after that became Lord Mayor of Liverpool and now 100 years later his photograph, as past captain of the golf club, is on the wall watching the evening’s proceedings. Alan added: “I hope he is as proud as we are.” In 1919, J Alderley Wilson occupied the chair, later becoming the first member to hold an acting rank in Provincial Grand Lodge as Provincial Grand Secretary from 1924 to 1937.

The lodge had strong links with the shipping industry, as in 1923 John Wise was master and later preceptor and his two sons followed him, Percy Wise (1948) and John Wise in 1954 – all three were directors of Thos & Jas Harrison, a well-known Liverpool shipping line. There were connections with Liverpool Cathedral in the form of Walter Goss-Custard, the first initiate, who became the lodge’s first organist and was organist at Liverpool Cathedral from 1915-1955.

Members of the lodge.

As the lodge had been formed to celebrate the end of the war, there were also strong military links. Ernest Kenwright completed 19 operations as mid-upper gunner and seven as rear gunner in Halifax Bombers and then as rear gunner in a Lancaster, flying a total of 80 operations. He was rear gunner in the master bomber aircraft for the Dresden raid in February 1945, which meant he had to fly around the city for two hours. Tom Davies volunteered for the Merchant Navy and was torpedoed when only 16 years of age. Because of his age the U-Boat commander took him aboard rather than leave him in the lifeboats, after which he was sent to a POW war ship. After the war, Tom was invited to a Saturday afternoon lecture ‘Freemasonry in Germany’, amazingly given by his old adversary the U-Boat captain who recognised him.

A raffle was held and raised £355. All goods things had to come to an end and the tyler Tommy Lunt was called upon to provide the last toast. It was a memorable evening and one that will be strongly remembered forever by all who attended.