In what can only be described as a dignified, confident and sincere ceremony, Malcolm Jolley, WM of Derby Lodge No 724, which incorporates Dingle Lodge No 4610, Rodney Lodge No 4625 and Duke of Devonshire Lodge No 6735, installed his successor Steven White. 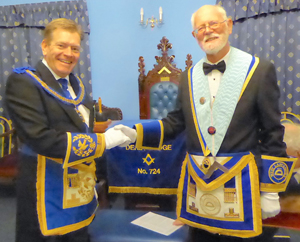 The brethren and guests assembled in the Geoffrey Hirst Masonic Suite at Woolton Golf Club to witness the ceremony.

The tyler Thomas Lunt, led in the procession of the WM and his wardens and having taken their respective seats, Malcolm opened the lodge in the first degree. The secretary informed the master that the minutes of the previous meeting had been circulated, they could therefore be confirmed and signed.

The DC was readmitted to inform the brethren that Assistant Provincial Grand Master Kevin Poynton was outside and demands admission. Kevin, accompanied by the Chairman of Woolton Group Andrew Whittle, Sam Robinson and Harry White entered the lodge in due form. Kevin was warmly welcomed by Malcolm and offered the gavel, to which Kevin responded, that it was his right to take the gavel but would return it so that one and all could have a wonderful night.

The DC Steve Williams gave salutations to Kevin and then John Lee. Ron Everard took the salute for the Provincial grand officers, following which, Malcolm adjourned the lodge to the second degree so that Bob Cremor and Ron Everard could present master elect Steven White, who assented to the ancient charges and reaffirmed his obligation.

The lodge was adjourned to the third degree and Malcolm Jolley thanked the officers of the lodge for all their support during the year.

Steven was duly installed into the chair of the lodge with sincerity, dignity and confidence. The working tools of each degree were explained by Malcolm, who also entrusted the warrant of the lodge to Steven. 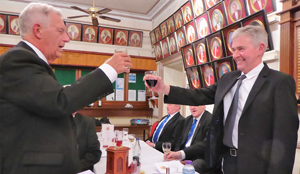 The installing master Malcolm, informed the WM that the ceremony was completed, which prompted Kevin to rise and convey congratulations and thanks from the Provincial Grand Master Tony Harrison to Steven for taking the chair a second time. Kevin said that had Tony been present he would certainly have also congratulated the installing master Malcolm and the DC Steve Williams.

Steven then had a very pleasant task to perform in presenting Kevin with a cheque for £500 for the MCF 2021 Festival. Kevin gratefully accepted the cheque and thanked everyone on behalf of the recipients.

After communications from Grand Lodge the DC formed the procession so that Kevin, the grand officers and acting Provincial grand officers could retire. The WM then closed the lodge in due form.

In response to the toast to his health, Kevin gave an update of the MCF 2021 Festival and provided details of the money raised, together with an explanation of the WLFC and asked brethren not to stop supporting either of them. He thanked the acting officers for attending upon him and went on to say that part of his responsibility was to look after communications and publicity for the Province, saying that the Province had a very loyal and hardworking team of officers and he thanked the Woolton Group Publicity Officer Colin Roberts for all that he did for the group. In closing he thanked Malcolm and the DC for a wonderful ceremony.

John Lee rendered the master’s song to Steve White, who in response said that it looked as if the lodge was going to have a busy year with two golden jubilee celebrations, as well as a third degree and a first degree ceremony.

Andrew Whittle presented a signed card from the group officials and after Kevin had been presented with a bouquet of flowers for his wife Sue, the evening drew to a close.

During the festive board a raffle was held which raised the sum of £150.