At the Geoffrey Hirst Masonic Suite at Woolton Golf Club, some 45 members and guests assembled to witness Len Jones install his son Andrew Elton Jones, of Yachtsman’s Lodge No 3698 (incorporating Otterspool Lodge No 6605), in the presence of the Provincial Grand Master Tony Harrison. 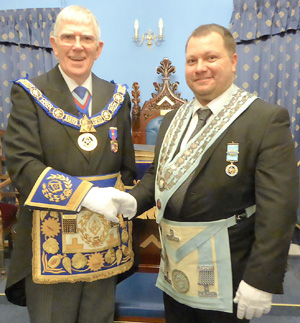 Prior to the lodge opening, Tony and Kevin walked among the brethren, wishing them well for a successful meeting.

The WM Simon Quinn opened the lodge and the usual business was quickly executed, so that the lodge could be opened to the second and third degrees.

The PrGDC was admitted, to inform the WM and brethren that the PrGM stood without and demanded admission. Tony, on entering the lodge was welcomed by the WM and offered the gavel of the lodge, to which Tony replied that he was delighted to be attending and thanked the WM for the gavel but on this occasion, it would be better in his hands and returned it.

The PrGDC offered the usual salutations to Tony and then to Kevin Poynton. Ian Halsall offered salutations to Keith Kemp, Andy Whittle and Sam Robinson and then to John Karran. The lodge was then adjourned to the second degree and the WM requested that John Karran occupy the senior warden’s chair and Clive Dickinson the chair of the junior warden.

Arthur Merrill then presented the master elect so that he could recite the ancient charges and regulations and take his obligation. The lodge was then adjourned to the third degree and the WM asked Len Jones to take the chair for the next part of the ceremony and to install his son into the chair of King Solomon, which he did with confidence and great pride. 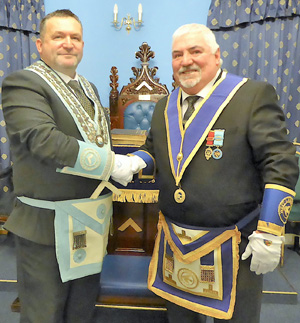 Jim Campbell, secretary of the lodge, took to the floor for the next part and asked the inner guard to admit master Masons, who duly entered the lodge, saluted the new WM and Jim then proceeded to give the explanation of the third degree working tools. The lodge was closed to the second degree and fellow crafts were readmitted, saluted the WM and Jim gave an exemplary explanation of the second degree tools. The lodge was closed to the first degree and entered apprentices were readmitted, saluted the WM and Jim provided the explanation of the first degree working tools. Once these brethren had taken their seats Jim presented the two warrants to the master together with the book of constitutions and lodge by-laws.

Once all the officers who were present had been invested, John Glover, who is the WM’s uncle, gave the address to the WM, John Karran gave the address to the wardens and Tony gave the address to the brethren of the lodge. After Tony had resumed his seat, Phil Gambrill informed the WM that the ceremony of installation was concluded, which was a prompt for Tony to take the floor and give his personal congratulations to the WM, wishing him a very happy year in office. Tony then turned to Len, saying that it had been a wonderful installation and he also congratulated everyone who took part, with a special commendation for Jim Campbell for the manner in which he presented the working tools.

The WM then had great pleasure in presenting Tony with a cheque for the MCF 2021 Festival for the sum of £500, for which Tony thanked the lodge. 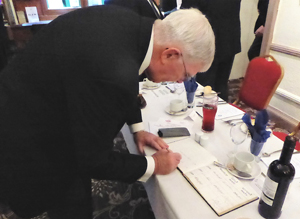 After a collection for charity and the first rising being concluded, Keith formed the procession to retire. After further correspondence had been given by the secretary, the WM closed the lodge in due form so that all the brethren could retire to the dining room for pre-diner drinks during which Tony and Kevin were invited by the lodge to sign the logbook – they are a seafaring lodge and keep a log of all WM and wardens.

Kevin Poynton gave the toast to Tony who in his response thanked all the acting Provincial grand officers for attending, saying that it had been a wonderful ceremony. Tony gave praise to the group chairmen and the officers for steering the ship in the right direction, saying that much of what is started in West Lancashire is adopted by London and rolled out across the country.

Keith was thanked by Tony for all the work he has done over the years and he was pleased to see him retire (great applause), only so that he could promote him to an Assistant Provincial Grand Master in April 2019. In other parts of his response, Tony updated the brethren on the Province’s activities and reminded brethren that Festival Jewels were still available, as were tickets for the ‘Night with the Stars’. In conclusion Tony hoped that everyone would continue to enjoy their Freemasonry. This was met with great applause from the brethren.

Len Jones rose to give the toast to the WM and it was very obvious that he was a proud father. Andrew Whittle presented the WM with a card signed by the group executive, Tony Harrison and Kevin. The WM then had much pleasure in presenting Tony and Kevin with flowers for their wives.

Simon Quinn (centre) and brethren of the lodge