Masons from the Woolton Group of Lodges and Chapters met at Woolton Golf Club for their November Sunday carvery lunch. This was an opportunity for Masons and their families to meet friends and introduce non-Masons to a social gathering, and some 72 people sat down for the meal. This year some families had brought along their grandchildren to make this a very family occasion.

The group chairman Andrew Whittle welcomed everyone and thanked them for attending and asked group vice chairman Mike Cunliffe to say grace.

As soon as everyone had sat down, the staff brought in the soup and each table then went up for their carvery, which was a superb choice of roast beef, ham and turkey, supplied with all the trimmings. With plates full to capacity the diners returned to their seats to enjoy their meal.

As with every Masonic occasion, there was to be the usual raffle, so as people were eating their food, the stewards moved amongst them to sell the raffle tickets.

Once the plates from the main course had been removed, the staff brought in the ever-excellent dessert trolley, but only for those who didn’t wish to lose weight. Refreshment having been enjoyed, Mike returned thanks.

Now it was time for the all-important raffle and everyone keenly waited for one of their numbers to be called. The raffle raised £300 and there was also £100 collected from donations. Andy Whittle announced that they would split the monies between the Poppy Appeal £100 and the MCF 2021 Festival £300, which was met with great applause. In his address to the diners, Andy announced that a pensioner’s party was to be held in December, as it had been a great success last year and the attendees were greatly appreciative of what the Woolton Masons had laid on for them.

As the afternoon drew to a close, people said how much they had enjoyed the event and I have no doubt that further Sunday luncheons will take place. 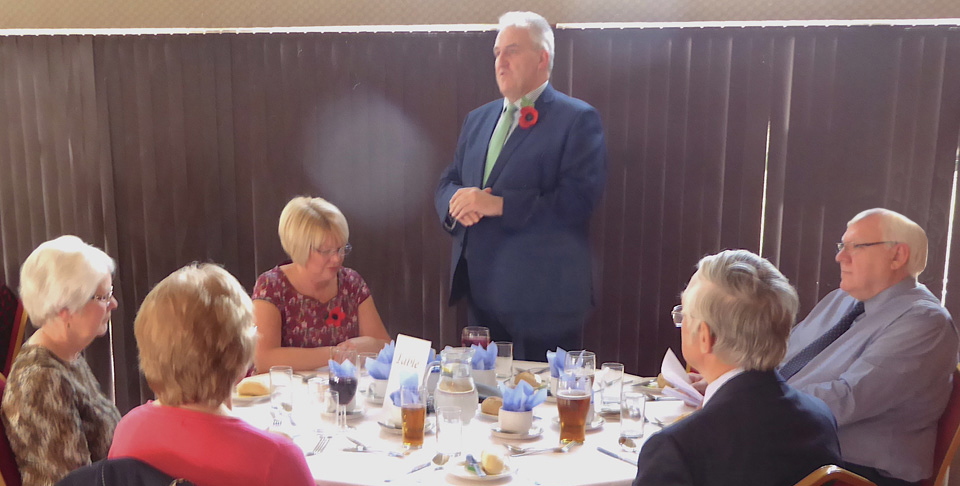