The brethren and guests of Prince’s Park Lodge No 4769, gathered in the Geoffrey Hirst Masonic Suite at Woolton Golf Club for the installation meeting. Their principal guest for the evening was Deputy Provincial Grand Master Philip Harry Gunning. 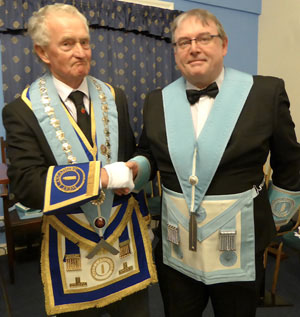 The WM Derek Grimley and his wardens processed into the temple to take their respective seats. After opening the lodge in due form, the WM welcomed all the brethren and thanked them for attending.

After the minutes of the last regular meeting had been confirmed and signed, Derek opened the lodge in the second and third degrees.

The Provincial Deputy Grand Director of Ceremonies Barry Fitzgerald was admitted to announce that the principal guest stood outside and demanded admission. Philip Gunning, accompanied by Assistant Provincial Grand Master Kevin Poynton, Woolton Group Chairman Andy Whittle and acting Provincial grand officers entered the lodge. Philip was warmly welcomed by Derek, saying that he hoped he would have an enjoyable evening and then offered him the gavel of the lodge, to which Philip replied: “I thank you for the warmth of your welcome and you said WM that you hoped I had an enjoyable evening and therefore I will return the gavel to you.”

The PrDGDC then lead the salutations to Philip, next to Kevin and then Andy Whittle. The WM then adjourned the lodge to the second degree and proceeded to appoint past masters to assist him for the remainder of the ceremony.

Peter John Ryan having been elected by the brethren of the lodge, was duly presented by Doug Gregson and Stan Bradley. Peter agreed to the Ancient Charges and Regulations and confidently took his obligation.

The WM then adjourned the lodge to the third degree and asked the brethren of the lodge to stand so that he could thank them for all the support they had given him during his year of office. 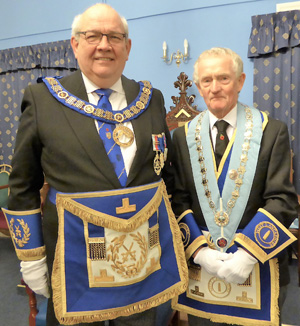 A very confident Derek then installed his successor with sincerity and precision with assistance from Andy Mooney.

Following the announcement that the ceremony of installation was completed, Philip rose to convey the greetings and best wishes of the Provincial Grand Master Tony Harrison. He also had a word of thanks to give to Derek, saying that it had been a wonderful ceremony and that he had performed brilliantly. Turning to the assembled brethren, Philip went on to say that Tony hoped that all of them would continue to enjoy their Freemasonry.

Peter rose to present Philip with a cheque for £500, made out in favour of the MCF 2021 Festival. Philip thanked the lodge for its generous donation and informed the brethren that the lodge had already given the sum of £429.50 to other Masonic charities during the year and on behalf of the recipients he thanked the lodge. 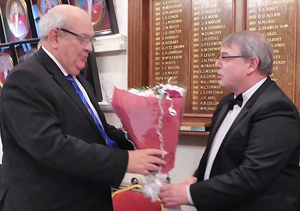 After the grand lodge communications had been received, the PrDGDC formed the procession to retire. After further communications, the lodge was closed in due form and the 32 brethren retired to the bar for pre-dinner drinks prior to taking their seats for the festive board.

In reply to the toast to his health, Philip again thanked the installing master for a brilliant ceremony and then continued to update the brethren on the Province’s business, saying that the Province of West Lancashire was leading the way in Freemasonry and much of what is started in the Province is adopted by Grand Lodge. He thanked Kevin Poynton and Andy Whittle for attending together with Barry Fitzgerald and the other acting Provincial grand officers.

Dave Woods sang the master’s song after which the WM presented flowers for the wives of the grand lodge officers. This had been an excellent evening and it had been a privilege to witness such a very fine ceremony.

Peter Ryan (rear row, centre) is congratulated by the brethren of the lodge.