At the appointed hour, the WM of Anfield Lodge 2215 Andrew Whittle, opened the lodge at the Geoffrey Hirst Masonic Suite at Woolton Golf Club, with over 40 brethren present. 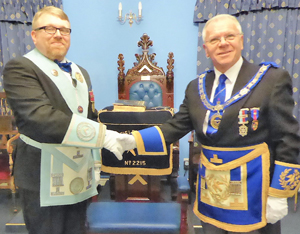 The opening business was quickly despatched so that the lodge could be opened to the second degree, but not before the three entered apprentices retired. The lodge was then opened to the third degree.

The director of ceremonies Gary Delvin duly entered the lodge and informed the WM and brethren that Assistant Provincial Grand Master Derek Parkinson stood outside and demanded admission. Derek, accompanied by Fred Hunter and acting Provincial grand officers Harry White and Dave Dutton duly entered the lodge, where the WM gave a very warm welcome to Derek, saying that it was great pleasure to receive him, especially as he had known the master elect since he was 10 years of age. Having been offered the gavel, Derek returned it. The WM then presented Derek with a Woolton Group lapel pin, which he hoped he would wear travelling around the Province, together with a cheque for £1,500 in favour of the MCF 2021 Festival, to which Derek thanked the brethren and said it was unusual to receive monies at this stage.

The DC asked the brethren to salute Derek, then Fred Hunter and Andrew Whittle and followed this by saluting Vic Albin, who accepted the salute on behalf of all the Provincial grand officers. 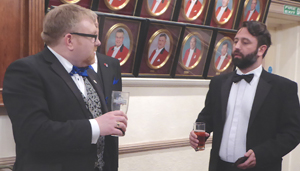 The master elect Alan Ledger works in a POCCU (post-operative critical care unit) and earlier in the year the wife of Colin Roberts, Woolton Group Publicity Officer, underwent a major operation for pancreatic cancer and as the operation closed at 8pm, Colin was informed that she would be moved to POCCU) and at about 9pm Colin visited her. There is a small team in this ward and Alan Ledger was one of the team. He recognised Colin and made it known to him that he was a Freemason meeting at the golf club. As Colin left, in his calm and confident manner, Alan told Colin that his wife would be well cared for and if at any time during the night he wanted to talk, just to pick up the phone and he would be there. Needless to say, Colin managed to get some sleep that night. Two days later Colin’s wife was transferred to PERU (pancreatic enhanced recovery unit) and unbeknown to Colin, for some time Alan regularly visited his wife. For his care and attention, Colin and his family are deeply grateful.

The lodge was adjourned to the second degree and the WM appointed past masters to assist him for the next part of the ceremony. Master elect Alan Ledger was presented by Gary Devlin (who had been his proposer) and Stephen Lyon. Alan agreed to the ancient charges and regulations and in a very confident manner took his obligation, after which the lodge was adjourned to the third degree. The officers of the lodge were thanked by Andrew Whittle for the unstinting support given to him during his year in office.

Alan Ledger was then well and truly, in a very fine ceremony, installed by Andrew Whittle into the chair of King Solomon.

Andy Whittle then informed Alan that the ceremony of installation was completed, which prompted Derek to rise and convey the congratulations of the Provincial Grand Master Tony Harrison, saying that had he been present he would certainly of congratulated the installing master for a very fine ceremony, as well as the brethren who had taken part.

Alan then had an important duty to perform, that of presenting Derek with another cheque for £1,500, for the relief chest of the MCF 2021 Festival. This was met with applause from the brethren and Derek informed them that they had now achieved Grand Patronage of the Festival and presented Alan with the certificate.

Diners enjoying the festive board.

Once the lodge had been closed in due form, the brethren made their way to the dining room for pre-dinner drinks, which afforded Derek an opportunity to ask everyone to toast the new WM and the installing master.

In response to the toast to his health, Derek thanked the grand officers, group publicity officer and the acting Provincial grand officers Harry White and Dave Dutton, for being present. He went on to say how he had witnessed a very fine ceremony and that he was pleased to be in attendance, having known Alan for so many years. Derek then provided the brethren with details of the forthcoming events within the Province and asked the brethren to continue supporting the festival. It was suggested that a daylight lodge be considered, so that those who were elderly or unable to drive at night could continue with their Freemasonry.

Andy Whittle presented Alan with a signed card on behalf of the executive and then proposed the toast to his health, saying that Alan, during a short period of illness, had learned the first degree tracing board and had recited it in lodge with only one prompt and it was obvious that he was going to be be a strong ritualist. In response Alan said he would keep his response short, as with the amount of work the lodge will be doing during his year, two initiations and four passing’s, they would be sick of the sound of his voice!

A raffle was conducted which raised £130. Mike Tattersall sang the song to the master and the tyler Brian Jones gave the last toast of the night, after which the celebrations were drawn to a close.