The members of Walton Chapter No 1086 held their annual installation ceremony at Woolton Golf Club. 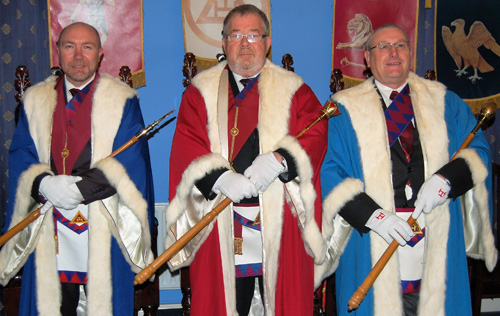 Pictured from left to right, are: Colin Graham, George Strickland and Perter Casey.

The three principals entered the chapter and opened proceedings in step with normal custom. The principals then extended a warm and friendly welcome to the companions and guests. First principal Barry Harnick, asked the companions to stand in silence as a mark of respect of departed merit to Reverend Walter Balmer, who was a member of the chapter for many years.

The ceremony of installation commenced under the direction of the chapter DC Steven Lynch. Paul McLachlan was honoured to take the first principal’s chair for the installation. The visitors witnessed a sincere ceremony with Paul McLachlan installing George Strickland as first principal, Colin Graham was elevated to second principal and Peter Casey was installed as the third principal, after which they invested their officers for the coming year. 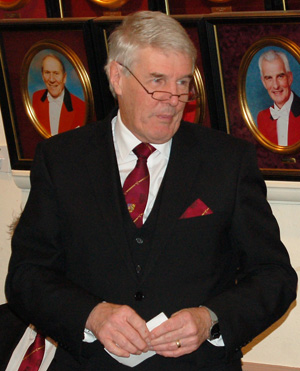 Paul Renton responding to the toast to grand officers.

The scripture readings for the principals were given by David Case to the third principal, to the second principal by Andrew Whittle, and to the first principal by Mike Cunliffe. The robe addresses were performed to a high standard by Paul McLachlan (scarlet), George Strickland (purple) and Colin Graham (blue). David Boyes gave a flawless address to the three principals, which was followed in similar vain by Paul with his address to the companions.

On the conclusion of the ceremony, Paul expressed the best wishes of the Grand Superintendent to the three principals, he also congratulated all the companions that took part in the installation. Paul was then presented with a cheque for £150 on behalf of the chapter to MCF 2021 Festival.

Paul presented Walton Chapter’s newest companions Geoffrey McKay and James Hodgson with their Supreme Grand Chapter certificates. The business of the chapter completed, the chapter was closed and all retired to the festive board.

Replying to the third toast at the festive board, Paul mentioned that having given the congratulations of the Grand Superintendent in the chapter, he now gave his own congratulations to the three principals. On membership, Paul encouraged sitting next to those who were not in a chapter at the Craft festive board and telling them what they are missing in this enjoyable degree of antient Freemasonry. Finally, after thanking the companions for there charitable donations, the evening was drawn to a close, the final toast of the evening was by the janitor Tom Lunt.