The members of De Grey and Ripon Chapter No 1356 held their annual installation ceremony at Woolton Golf Club. The principals extended a warm and friendly welcome to the companions and guests. Before the chapter was opened, DC Peter Dodd asked the companions to stand in silence as a mark of respect of departed merit to Arthur Bartley who was a member of the chapter for many years.

The chapter was opened by the three principals, Mathew Wilson, Albert Hogg and Stephen White, first, second and third principals respectively. With the regular business completed, the companions were ready to receive the principal guest, Deputy Grand Superintendent Paul Renton.

The three principles arose and extended a very warm welcome to Paul and the ceremony of installation commenced. Mike Cunliffe was honoured to take third principal’s chair, Andrew Whittle that of the second principal and Mathew Wilson remained in the first principal’s chair. Albert Hogg was installed as first principal, Steven Williams was installed second principal and David Colling becoming third principal, after which they invested their officers for the coming year. 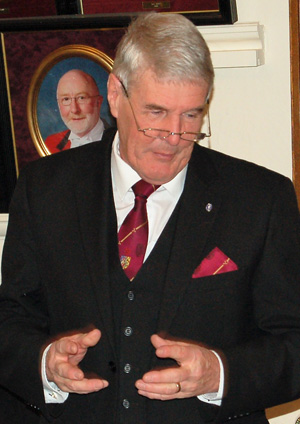 Paul Renton responding to the toast to the grand officers.

On the conclusion of the ceremony, Paul expressed the best wishes of the Grand Superintendent to the three principals and also congratulated all the companions who had taken part in the installation. Paul was then presented with a cheque for £400 on behalf of the chapter to the MCF 2021 Festival. The business of the chapter completed, the chapter was closed and all retired to the festive board.

At the festive board, Paul responded to the toast to the grand officers, by thanking scribe Ezra Bill Carter, for his help in providing the background information that made his visit to the chapter a pleasant one. Paul also thanked Sam Robinson and the group officers for their hard work and commitment, and the acting Provincial grand officers for their support.

Paul moved on to recruitment and retention saying that it was particularly important that new members to the chapter were looked after and included in performing ritual whenever possible. He added that new companions needed assistance to understand the Royal Arch.

Paul went on to mention the launch in December 2018, of the online learning resource called ‘Solomon’. The launch of Solomon will make daily advancement a reality in the Craft and Royal Arch. He urged the companions to log on and investigate the programme, as it will be a great way to learn more about Freemasonry. Masons will be able to use it to formulate lectures and discussion topics.

On behalf of Provincial grand officers, David Case rose to extend his warmest greetings, adding that the companions present had been witness to an enjoyable ceremony and that it had been a delight for him to attend this installation.

To complete the evening, the raffle raised £125 for charity. Tom Lunt closed the evening by proposing the janitor’s toast.