Match of the day

The ‘Freemasons Rugby Challenge Cup’ was a match that had been talked about for quite a long time. The game was held on 9 February and was between the West Lancashire Freemasons Rugby Football Club and the Leicestershire and Rutland Light Blues. Both teams had been practicing and were ready for battle. 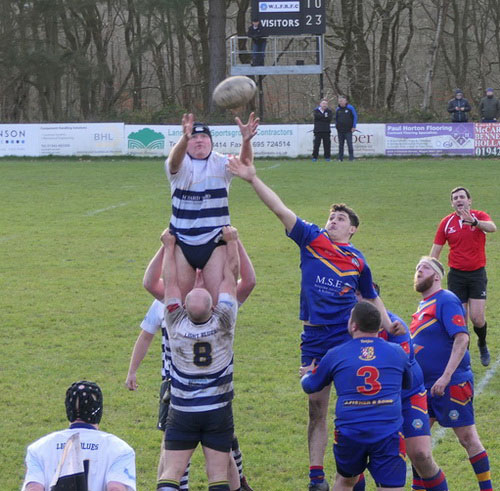 A painful way to lift someone, but no hospital treatment was required!

The weather was kind and fortunately there was no frost on the pitch, a week earlier and things would have been very different. It was a bright day with not too much wind, therefore ideal for the many spectators who turned up to watch the game. The Freemasons Rugby Challenge Cup was from a donation made by both clubs to encourage more Masonic players to come out and enjoy themselves playing rugby. More matches will be arranged in the future.

The game commenced at 13:30 and two minutes later had to be halted whilst the first injury of the day was dealt with. Water was brought onto the pitch to treat a rather nasty nose bleed; that was a good start. The game resumed and 15 minutes later the score was 8 – 0 to the visitors, (the Light Blues from Leicestershire). The home team (West Lancashire RFC) fought back to make the score 8 – 5. The match was played in a robust style and by half-time the score was 13 – 10 to the visitors.

Substitutes were used during the second half and Light Blues continued with their assault making best use of their substitutes’ fresh legs on the pitch. The game finished up with a 30 – 10 win for the Light Blues. Unfortunately there were injuries during the game and it was reported that three players required hospital treatment; one for a hand that had been stamped on, another for a nasty shoulder injury and a third player with a leg injury. Apart from that the rest of the players looked in reasonably good shape despite the inevitable knocks, bruises and other minor injuries picked up during the game.

Ian Lynch was one of the West Lancashire players who was interviewed after the game and this is what he had to say: “From a players point of view, the training and preparation for the game as organised by Garry Hacking and Phil Marrow enabled the lads to play together as a team, despite none of us having played together before. The game itself was a tough encounter as expected, played in a hard yet fair spirit, with the experience of the Leicestershire side having played together on several occasions, proving to be the difference in the end.

The effort from the West Lanc’s players was immense and there was huge potential shown for the future. Plenty of bodies were put on the line with at least three lads requiring hospital treatment, showing the strong level of commitment given. Our hope is that we can now attract some more players from the Province to give us more options in future games, which everybody involved is looking forward to. 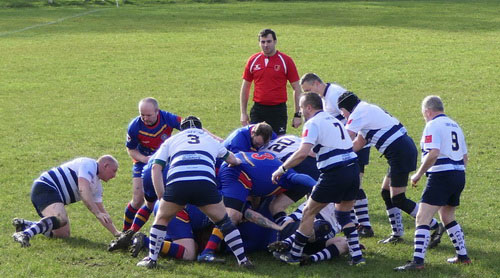 The ‘buzz’ and camaraderie among all those who contributed to the event was fantastic to see and shows that Freemasonry can be channelled in many different ways to great effect. We are all planning visits to see each other in our respected lodges when we can, to keep the spirit going. We are also constantly in touch via Facebook and WhatsApp. Despite the aches and bruises, I for one am definitely up for more and look forward to our committee meeting in the next week to plan our next steps.”

After the game various refreshments were served in the warm atmosphere of the clubhouse. The players were clearly in need of re-hydration, which is why they consumed copious amounts of fluids from the bar with great enthusiasm!

During the after-match celebrations awards were presented. The Freemasons Rugby Challenge Cup was presented to the captain of the Light Blues team Andrew ‘Jock’ Keenan by the WLFRFC honorary patron, Tony Harrison (Provincial Grand Master). The man of the match award (on this occasion men of the match) was presented by the WLFRFC honorary president, Paul Renton to both the West Lancashire hooker, Mark Brant as well as to Leicestershire and Rutland fly half, Ollie Stanley. The honorary vice patron Philip Gunning described several memorable moments from the game and then presented the most memorable moment award to Lancashire’s full back, Kenny Marsh. The final presentation was a token of appreciation given to Garry Hacking with a tremendous cheer from the crowd at this point.

Apart from being an ideal event to bring Masons and non-Masons together, £960 was raised for both Masonic and non-Masonic charities. The £960 included a donation from the Light Blues RFC as well as profit from the raffle. Both the St John Ambulance and the Wigan Rugby Club benefited from donations, as did the West Lancashire 2021 Masonic Charitable Foundation Festival. The raffle was notable in that there were approx. two dozen prizes so many people went home feeling very lucky that evening.

The day was certainly one to remember and the entire players and spectators present look forward to the return match, hopefully with fewer injuries on the day but with just as much fun for all.

Everyone remained good friends once the game had finished.