Woolton Lodge of Unity No 1086 was pleased to receive as their principal guest Andrew Barton for their installation ceremony. This was Andrew’s first visit to the Woolton group and he was impressed with the facilities that the Geoffrey Hirst Masonic Suite had to offer. 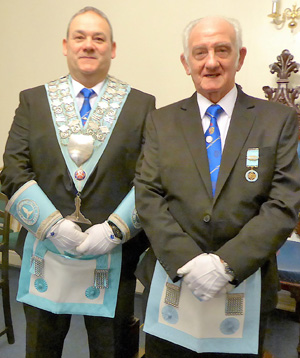 The lodge was opened after the WM Christopher Taplin had greeted everyone warmly and the minutes of the previous regular meeting were confirmed and signed.

The director of ceremonies David Moore and the deacons retired and David was readmitted to announce that the representative of the Provincial Grand Master stood outside and was seeking admission. Andrew Barton, accompanied by Roy Pine and Woolton Group Chairman Andrew Whittle were admitted and duly took their seats. Andrew was warmly welcomed by the WM and in response said that he was pleased that he had not been offered the gavel as he was looking forward to a relaxed evening.

The WM then opened the lodge to the second and third degree, where the DC extended salutations to the grand officers and Roy Pine responded on their behalf. David Newland accepted salutations on behalf of all the Provincial officers.

The lodge was adjourned to the second degree and the WM requested the following brethren to assist him; David Newland to occupy the senior warden’s chair; Tommy Lunt the junior warden’s chair and Peter Casey to act as inner guard.

Master elect Stephen Charles Booker was presented by his father Ernie Booker, who had been his proposer into Freemasonry. Stephen assented to the ancient charges and regulations and then proceeded to take his obligation as master elect.

The WM then thanked all the officers of the lodge for the help they had given him during his year of office and then adjourned the lodge from the second degree back to the third degree. All below the rank of an installed master, with the exception of the master elect were requested to retire, following which Chris Taplin installed his successor in an exemplary manner. 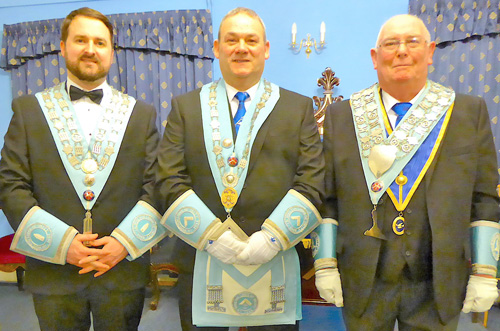 The newly installed WM and his wardens. Pictured from left to right, are: Edward Hanna (SW); Stephen Booker and Michael Daly (JW).

Christopher Taplin informed the WM that the ceremony of installation was concluded, which prompted Andrew Barton to rise and convey the greetings and best wishes of the PrGM Tony Harrison, saying that had he been present he would certainly have congratulated Christopher Taplin and others who had assisted for such a wonderful ceremony. Andrew conclude by saying that Tony Harrison wished good health to all the brethren and hoped they would continue to enjoy their Freemasonry.

The new WM then had great pleasure in presenting Andrew with three cheques: £300 for the MCF 2021 Festival, £400 to Friends of Alder Hey Hospital and £386 to Friends of Tithebarn, making a magnificent sum of £1086, which Andrew thanked the lodge, saying that they would never know the recipients but the gifts would enrich their lives.

Once a collection for charity had been taken, the secretary reported communications from grand lodge and the DC formed the procession of grand officers to retire.

After witnessing a wonderful ceremony and once other communications had been received, the brethren retired to a very convivial festive board.