The Ball keeps on rocking and rolling

The Freemasons of West Lancashire and their partners once again proved that they know how to have a good night out. The 159th ‘Grand Ball and Banquet’, which was held at the University of Bolton Stadium at Bolton, was hailed yet again as a great success.  Over 530 Freemasons and their partners joined the President of the event, Provincial Grand Master Tony Harrison and his wife Maureen for another memorable evening. As usual, all the gentlemen wore full Craft or Royal Arch regalia, with masters and first principals proudly wearing the collars of office from their respective lodges and chapters. 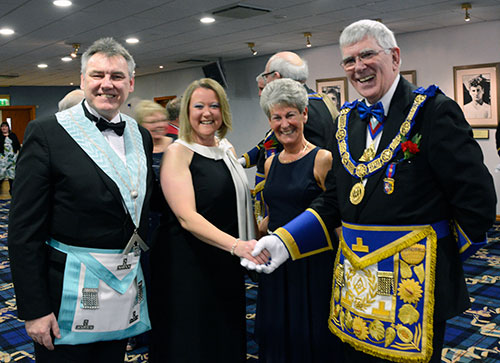 Tony and Maureen welcoming guests at the reception.

The Chairman and the vice chairman of the Ball, John Karran and Barry Dickinson who are respectively the Provincial Senior and Junior Grand Wardens, together with their wives Sheila and Sandra joined Tony and Maureen in welcoming guests at the reception before the dinner.

Once all the guests had taken their places in the main dining suite, the principal guests and their ladies were formally introduced by Provincial Grand Director of Ceremonies Keith Kemp and they processed into the hall to loud applause. A very appropriate and humorous toast was given by the Provincial Chaplain Rev Canon Godfrey Hirst, prior to the banquet being served.  The event caterers once again provided a four-course menu that was of the standard usually enjoyed at this venue.

With the diners happily relaxing for a short time after the excellent meal, the Grand Ball Chairman, John Karran welcomed everyone. He began by saying:” Can I express my gratitude to all of you for supporting this, the 159th Grand Ball and Banquet.” He further announced that numbers attending had grown and that this was a very encouraging fact.

He continued by saying: ”My thanks must rightly be extended to those brothers who have put this stunning event together. I refer to the organisational committee, headed by David Ogden and Andy Wiltshire, not forgetting my vice chairman Barry Dickinson.”

John also paid tribute to the exceptionally hard-working director of ceremonies teams from both Craft and Royal Arch for steering everyone in the right direction, under the watchful eye of Keith Kemp. He also gave thanks for the wonderful musical accompaniment provided by Ray Dainton during the meal. 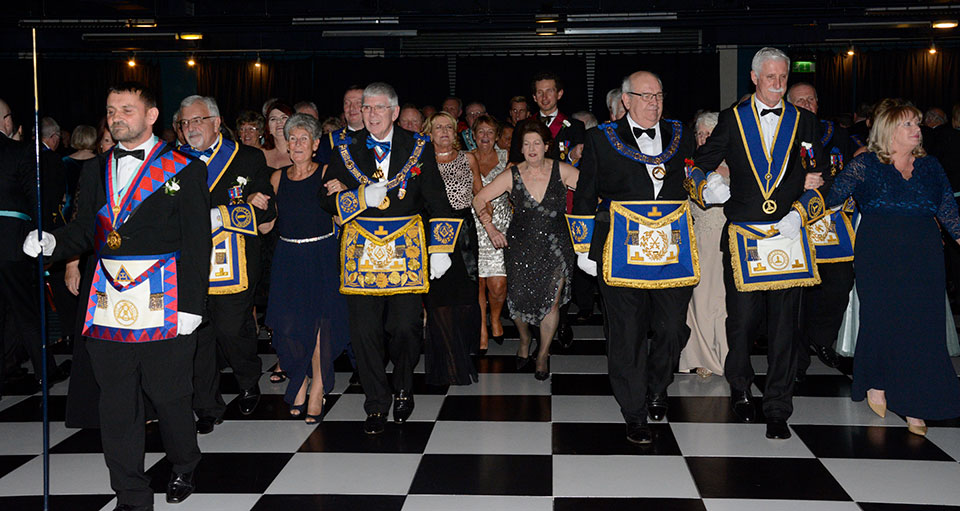 The chaos and the fun which is the Grand March!

With all the tributes and thanks sincerely paid by John, the team of DC’s quickly oversaw the gathering of the distinguished assembly onto the ‘starting grid’ of the ‘Grand March’ chequered pavement. As usual, Tony and Maureen were in ‘pole position’ and flanked by Phil Gunning and the two Provincial Wardens and their partners. As the first musical notes rang out, the march began with literally hundreds of couples being led the length of the dance floor by those dual masters of choreographic intricacy, David Thomas and Barrie Crossley. 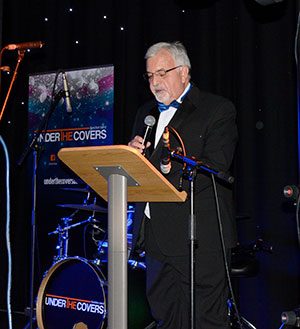 Barry Dickinson thanking the attendees at the end of the evening.

As ever, it would prove almost impossible to describe the apparent combination of chaos and precision that typifies the ‘Grand March’ but it’s undoubtedly the most eagerly anticipated feature of this annual event. The row upon row of exuberant and laughing participants, once again proved the enjoyment and fun that this march adds to an already great evening.

At the end of the march, or more accurately, when the majority felt unable to ‘march’ any further the exhilarated and noisy assembly returned to their tables and the brethren were able to remove their regalia. As ever, the exhaustion and excitement were the topic of much shared conversation, well on into the evening.

The night then moved into top gear with the band, ‘Under the Covers’, providing a popular mix of music which enabled some of those on the dance floor to prove that the Province of West Lancashire really has got the potential for enjoying Freemasonry in all its manifestations. As the night all too quickly reached its climax, Barry Dickinson thanked everyone for making the evening such a success and encouraged them to return in even greater numbers next year.  Expressing further thanks to the many contributors to the Grand Ball’s organisation, he wished everyone a safe homeward journey.

For the ‘younger set’ and the more resilient ‘not so younger set’, the party atmosphere continued into the ‘wee, small hours’ with music supplied by the DJ to keep them entertained and away from their beds a little longer. 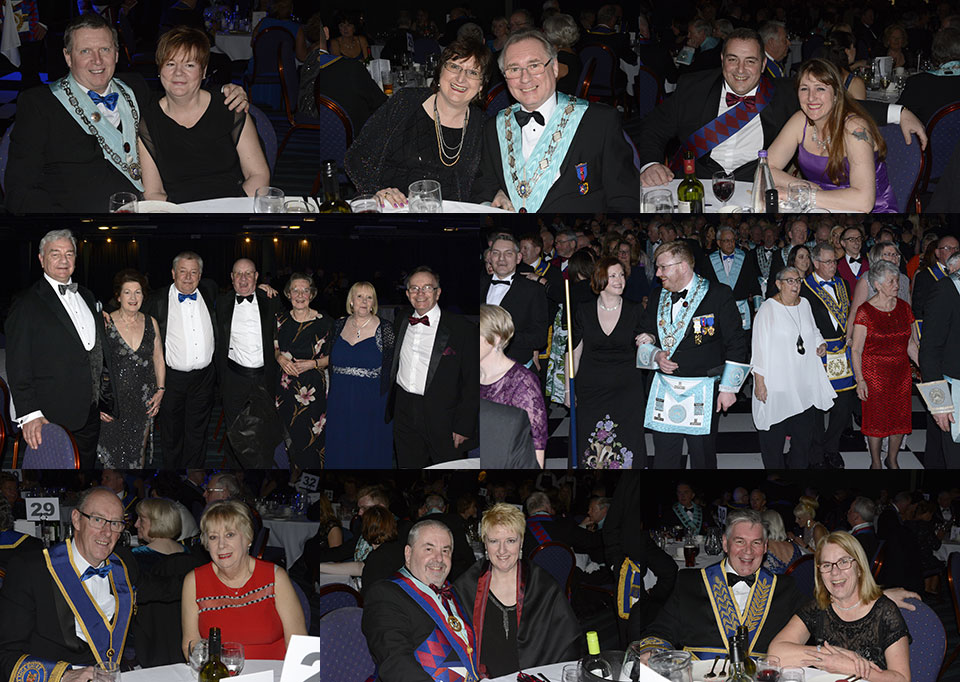 Camera roll from the evening.