A first for Old Lerpoolian Lodge

Old Lerpoolian Lodge No 9270 meets at the Geoffrey Hirst Masonic Suite in Woolton Golf Club and on this occasion, they were extremely pleased to welcome, as their principal guest, Assistant Provincial Grand master Kevin Poynton. 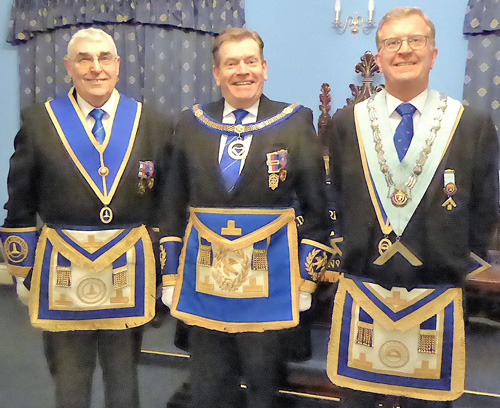 Pictured from left to right, are: Fred Hulse, Kevin Poynton and Michael Stephenson.

Some 50 members and guests assembled in the ‘Royal Suite’, where director of ceremonies Mike Mansfield-Corbett started proceedings, by calling brethren to order. WM Michael Stephenson opened the lodge and assured that the minutes of the previous meeting were confirmed and signed.

The next item of business was to ballot for a joining member Harry White and this was carried unanimously, following which, the DC retired from the lodge.

The lodge was then opened to the second and third degrees.

The DC was readmitted, to inform the brethren that Kevin Poynton stood outside and demanded admission. Kevin, accompanied by grand officers Peter Connolly, David Hawkes and Keith Sanders and acting Provincial grand officers Harry White, Stephen Clarke and David Dutton, processed into the lodge. Kevin was warmly welcomed by the WM, who offered the gavel to Kevin, which he returned with thanks.

The lodge was adjourned to the second degree and Peter Connolly was asked to occupy the senior warden’s chair and Keith Sanders that of the junior warden, whilst Ric Thompson occupied the position of inner guard.

Being a good friend, Mike Cunliffe presented Fred Hulse as Master elect and having been in the chair of another lodge on a previous occasion, Fred reaffirmed his agreement to the ancient charges and regulations, as well as his obligation. This was the first time, that other than an Old Lerpoolian was to occupy the chair.

The retiring WM thanked his officers for all their support during his year of office.

All below the rank of an installed master were requested to retire, so that Fred could be installed into the chair in a warm and friendly manner by Michael Stephenson.

Diners at the festive board.

The warrant of the lodge was delivered to the new WM by John McGibbon, who went on to provide the address to the master. The WM appointed his wardens and they were addressed by Keith Sanders after which the other officers of the lodge were invested.

Following the conclusion of the installation, Kevin Poynton rose to convey the congratulations of the Provincial Grand Master Tony Harrison, to whom he had been speaking that very morning. Tony sent his very best wishes to the new WM and all the brethren, wishing them a happy and healthy year. Kevin also thanked the installing master Michael Stephenson and Mike Mansfield-Corbett for providing an excellent ceremony. He also congratulated Harry White on being accepted a member of the lodge.

Fred Hulse had great pleasure in presenting two cheques to Kevin on behalf of the lodge. The first for Friends of Tithebarn for £100 and then £750 for the MCF 2021 Festival, both were greatly appreciated and Kevin informed the lodge that following the donations, the lodge had become a ‘Vice Patron of the Festival’ and the certificate would be with them shortly.

Other business was then quickly dealt with, so that the brethren could retire to the bar for pre-dinner drinks, before taking their places at the festive board. 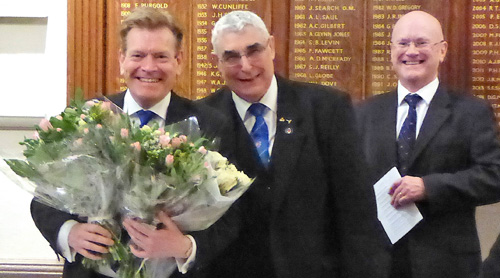 In response to the toast to his health, Kevin informed the brethren that the Grand Master had been re-elected and this would be his 52nd year as Grand Master. This was received with great acclaim from the brethren.

Kevin spoke about the benefit of looking into and using the information provided on the Solomon website.

The Province is in good heart said Kevin, as he went on to thank, with great sincerity, the acting officers who had provided him with sterling support during the year, namely Harry White, Stephen Clarke and David Dutton, and wished them well for the future.

The lodge is fortunate to have as it’s organist the Provincial organist Stephen Derringer, who will receive a promotion at the next meeting of Provincial Grand Lodge to the rank of Past Provincial Junior Grand Warden.

Recently, Kevin, accompanied by the PrGM, had paid a surprise visit to St Vincent’s School in West Derby, Liverpool, a specialist school for sensory impairment and other needs, where they had been seen first-hand, what the school provides. The school provides enrichment for students and highlights the students’ individual strengths. So, it was with a great deal of pleasure that Freemasons donated £35,000 to the school, to help train students, who would then go on to train others. Tony and Kevin also had very great pleasure in visiting Zoe’s Place, which had featured recently on local television, as, due to a drop in donations, they were going to reduce the number of beds available by two. Within a few hours of the program being aired, the WLFC had pledge £10,000 and the cheque was handed over during the visit.

In closing, Kevin thanked the group officers for all the hard work they did at Woolton and the publicity team which he was proud to lead.

After an excellent evening the brethren retired.