Replacement ambulance handed over at Tithebarn

It was a sunny summer morning when Provincial Grand Master Tony Harrison and his wife Maureen left Morecambe heading for Crosby, Liverpool, to take a leading role in the handing over of a new replacement ambulance at the Tithebarn Care Home. Unfortunately, by the time they arrived, they found themselves in the middle of one of the wettest weekends of the summer. The weather, however, did not dampen the spirit of the occasion. The gathering of 70 specially invited notable brethren and their wives and partners from the West Lancashire and Cheshire Provinces, was organised by the Vice President of The Friends of Tithebarn Ian Elsby, to see the unveiling and presentation of the new high spec ambulance which was purchased at a cost of £45,000, the money raised by the ‘Friends’. 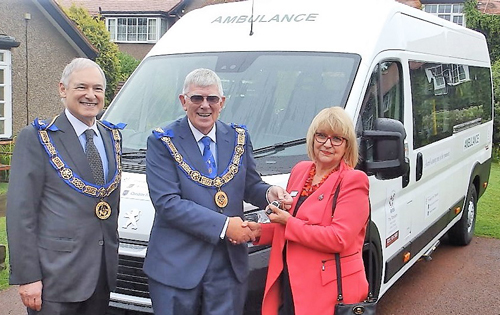 : Pictured from left to right are: Stephen Blank and Tony Harrison handing the keys for the ambulance to Sylvia Short.

The afternoon commenced when all of the guests had arrived and were welcomed by Ian, who invited them to enjoy a glass of wine and a tempting variety of canape’s whilst chatting with friends old and new. Tony was delighted to be joined by the PrGM of the Province of Cheshire Stephen Blank, who in turn was accompanied by one of his assistants, Jeff Cunningham. Also present were three Assistant Provincial Grand Masters from the Province of West Lancashire Frank Umbers, Kevin Poynton and Derek Parkinson. The PrGM of the Mark Degree Keith Beardmore, plus a plethora of group chairmen were also in attendance.

A break in the rain signalled an opportunity for Tony, Stephen and other guests to view the ambulance, which had been temporally adorned with signs provided by committee member Geoff Lloyd. Photographs were then taken, before hastening back to the marquee to enjoy a sumptuous buffet that had been prepared by Yates Catering at the Masonic Hall in Litherland. The smiling staff serving the delicious food.

The Friends of Tithebarn consists of representatives from groups from within the catchment area together with some of their wives and partners. They also receive regular donations from Area 1 in the Province of Cheshire. The ‘Friends’ are then able to provide support to the Royal Masonic Benevolent Institution owned home, to make the residents stay more comfortable and set it apart from similar institutions. At the time of the care home being purchased, it was occupied by the Sturla family, who owned several department stores in Liverpool.  The cost of purchasing the house and making the alterations amounted to £24,000. A huge amount of money back then. The home was officially opened on 17 October 1956.

In 1974, the RMBI care company charity took over the ownership of the care home and with the dedicated work of professional staff; they reached the exemplary standards still being enjoyed by the residents today.

Since the formation of The Friends of Tithebarn in 1978, they have raised funds for many projects including a ceiling lifting system, garden furniture, a summer house, computer systems, curtains and other furnishings and £50,000 to assist in the extension of the lounge area and the refurbishment of a tea room for residents and their guests.

Following the buffet, Tony spoke to the assembled guests, thanking everyone for their support and the Friends of Tithebarn for their hard work and generosity. He also thanked Frank Jennings and his company who had supplied and converted the Peugeot Panel Van into the high-tech ambulance/personnel carrier which can convey seven passengers in comfort, including two wheelchair users, thanks to an on-board electric ramp. Tony then formally handed over the keys to Senior Trustee of RMBI, Sylvia Short, who has responsibility over care homes in the North of England and North Wales. Sylvia thanked Tony and of course the generosity of Freemasons in the area. Loud applause then followed.

Many of the guests stayed on for a chat and a final farewell. It only remained for volunteers on the committee to clean up and tidy the marquee. The end of a very pleasant afternoon.

Article and photographs by Phil Marshall.