The eagerly awaited ‘Woolton Golf Competition’ was held at Woolton Golf Club, the home of the Woolton Masons. 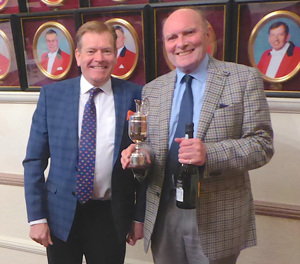 In the run up to competition day the weather had been very mixed and the golf club maintenance team had worked really hard to provide an excellent course for the day and the players were very complimentary about the course.

Some 21 golfers, both Masonic and non-Masonic, gathered for the 1:30pm tee-off. The competition was divided into several sections, an individual Stableford, full handicap with prizes being awarded to the group winner and runner up; guest winner and runner up; the Cyril Smith Trophy presented to the best Woolton Group lodge or chapter team of three players; the Geoffrey Hirst Trophy presented to the best group front nine and the Noel Hawkes trophy to the best group back nine. There were other awards for the longest drive, nearest the pin and twos.

34 diners consisting of players and non-players attended the dinner.

Once the group vice chairman had returned thanks, Andy Whittle proposed the ‘loyal toast’ and then proposed the toast to the Woolton Golf Club saying that the course was in excellent condition and he thanked the golf club for all their hospitality. The response to this toast was by Simon Edge, who had been delegated by the ‘Captain of Captains’. Simon thanked everyone for attending and providing an enjoyable afternoon, saying that they were very pleased to have the Woolton Masons at the golf club and that he had been one of the directors who was involved with their move from Woolton Hall and hoped that the good partnership would continue. 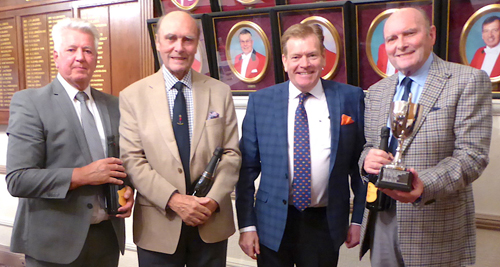 Mark Keig from the Warrington Group won “Nearest to the Pin” whilst Neil Moir from the Garston Group won the ‘Longest Drive’ category. The guest winner was Simon Edge, a director of the Woolton Golf Club with Mark Keig being the runner up. The trophy for the guest team winners was awarded to Dave Goddard, Mark Keig and Mike Williams from the Warrington Group. The winners of the Masonic group team was won by Geoff Johnston, Nick Honess and Ken Smith, who were presented with the Vic Albin Trophy, whilst the Geoffrey Hirst Trophy was won by Nick Honess of Old Lerpoolian Lodge No 9270. 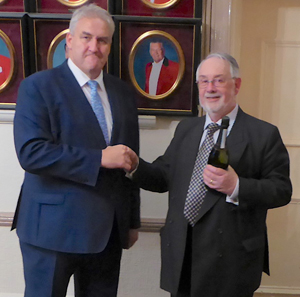 Past Woolton Group Chairman David Hawkes was extremely pleased to present the ‘Noel’s Up’, in memory of his son, to Ken Smith. For the past few years the same person has won the PEDs award, but this year it was taken away from him by a jubilant Paul Renton.

The group team winners were City Lodge No 2514, comprised of Geoff Johnston, Peter Johnston and Ken Smith. The final trophy, the President’s Trophy, was awarded to Geoff Johnston who had been a previous winner on several occasions. He had played well during the day even scoring a birdie on the latter part of the course which improved his overall score.

Everyone thought that it was all over but Andy Whittle said that there was to be one final surprise presentation to the Woolton Group Publicity officer Colin Roberts in recognition of his services to the group. Kevin Poynton was eager to grab the camera!

During dinner a raffle was held which raised £157 for charity.