Alan Routledge installed by his proposer

Members and guests of the Lodge of Tranquillity No 3877 assembled in the Royal Suite at Woolton Golf Club for their installation ceremony.

The lodge was honoured by the presence of the Assistant Provincial Grand Master Kevin Poynton. Worshipful Master Ian McGovern opened the lodge in due form and read a short eulogy for the passing of a brother Paul Moody, asking the brethren to stand in respect of departed merit. Paul had presented the lodge with a new banner in 2018.

The minutes of the last regular meeting were confirmed and signed. This would be the culmination of a great year for Ian, as the lodge had celebrated its centenary, Alan Carter had celebrated his 50 years in Freemasonry and a new brother had been initiated.

The lodge was opened to the second and third degrees and Kevin Poynton, accompanied by grand and Provincial grand officers processed into the lodge. Ian warmly welcomed Kevin and offered him the gavel which he accepted and swiftly returned so that the WM could enjoy the evening.

Kevin was duly saluted and Arthur Cregeen, along with other grand officers were saluted; this was followed by Vic Albin taking the salutations on behalf of the Provincial grand officer’s present. 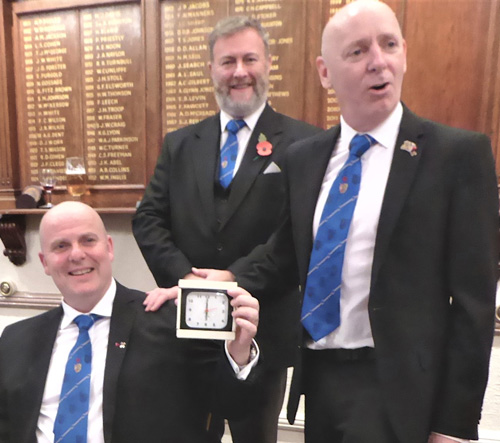 The lodge was adjourned to the second degree so that the master elect Alan Routledge could be presented by David Boyes. Fred Hulse, as Alan’s proposer into Masonry, was the installing master. Alan assented to the ancient charges and regulations, took his obligation and was installed into the Chair of King Solomon in a very sincere and outstanding ceremony, the majority of which was delivered by Ian McGovern.

Following the installation ceremony, Kevin rose to convey the congratulations and thanks of the Provincial Grand Master to the newly installed master. Kevin also congratulated Ian for a very fine ceremony. At this point Alan was pleased to present Kevin a cheque for £250 for the WLFC to which Kevin thanked the lodge on behalf of those who would benefit from the charity.

The lodge DC David Boyes formed the procession to retire. After Kevin, the grand officers and acting Provincial grand officers had retired the DC was summoned by the tyler and on his return announced that Kevin was coming back in. The brethren were wondering what was about to happen as this is an unusual move. Kevin informed the lodge that a past master William Walton, who had been master in 2007 had left a significant sum of money to the lodge and it had been decided that the lodge would purchase a gold-plated set of working tools, which Kevin showed the brethren and then presented to the master. 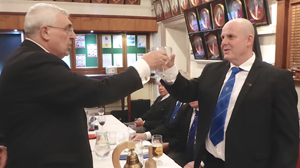 Kevin retired once again and the lodge was closed in due form so that brethren could retire to the dining room to enjoy the festive board.

In response to the toast to his health Kevin congratulated all who had taken part in the ceremony and went on to mention Grand Lodge and the festival but more importantly the need to check on brethren who had not been seen for a while to ensure that they were well.

The installing master was pleased to propose the toast to the newly installed WM, saying that Alan worked in a nearby motor manufacturer and he had been pleased to propose him into the lodge and to install him. However, Ian informed us that the WM had a failing! His time keeping left much to be desired, as on each lodge night he would always text Ian to check on the start time even though the lodge, which was over 100 years old had always met at 6.00pm. Ian then had much pleasure in presenting Alan with a new alarm clock set for 6pm. Ian informed the brethren that the WM had been part of a team that had cycled from Liverpool to Hull and on another occasion Liverpool to Edinburgh.

Fred Hulse sang the master’s song, which after the tyler’s toast, brought a very enjoyable evening to a close.

During the meal a raffle was held which raised £106 for charity.