Many brethren and guests turned out to witness Graham Fairley being installed into the chair of Derby Lodge No 724 where the lodge was honoured by the presence of the Provincial Grand Master Tony Harrison at the Geoffrey Hirst Masonic suite at Woolton Golf Club. 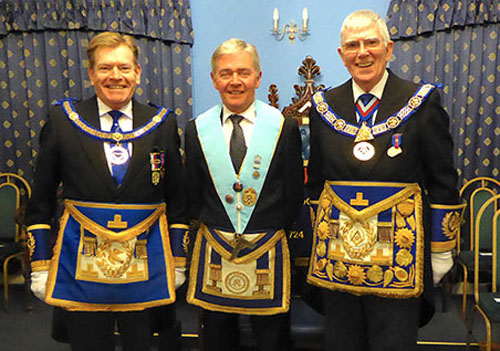 Pictured from left to right, are: Kevin Poynton, Stephen White and Tony Harrison.

The WM Stephen White opened the lodge and the minutes of the last regular meeting were confirmed and signed. The lodge was opened to the second and third degrees after which the Provincial Grand Director of Ceremonies Malcolm Bell entered the lodge to inform the brethren that Tony Harrison stood outside and demanded admission.

Tony, accompanied by Assistant Provincial Grand Masters Kevin Poynton and Frank Umbers, together with grand officers John Lee, group chairman Andrew Whittle and Sam Robinson and acting Provincial grand officers were admitted into the lodge. Tony was warmly welcomed by Stephen and offered the gavel of the lodge to which Tony replied that it was good to be present and see so many brethren and on arriving this evening he was told that he would have an enjoyable event and to that end he gratefully returned the gavel to the WM in order to enjoy himself. 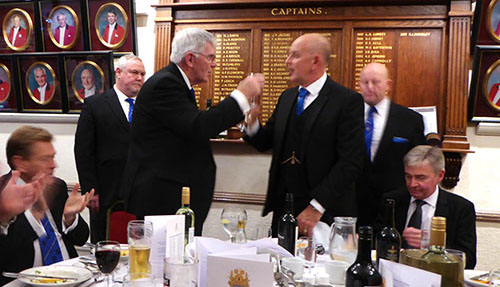 The WM thanked the officers of the lodge for their support during his year then all below the rank of an installed master were requested to leave the room for a short time while Stephen White installed Graham as his successor. 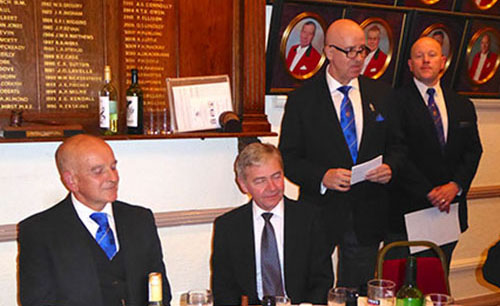 Pictured from left to right, seated are: Graham Fairley and Stephen White. Standing: Steven Williams proposing the toast to the new WM, attended by Malcolm Bell.

As the installation ceremony was now complete the Provincial Grand Master rose to convey his congratulations to Graham and wish him a very happy and healthy year in office. Tony warmly congratulated the installing master who had done most of the work, thanking him for all the hard work that was evident during the ceremony.

The WM then had great pleasure in presenting Tony with a cheque for £1,000 for the Masonic Charitable Foundation 2021 Festival for which Tony thanked him informing the brethren that the lodge was now a Vice Patron of the MCF 2021 Festival which received acclaim from all present and he presented them with the appropriate certificate of patronage. 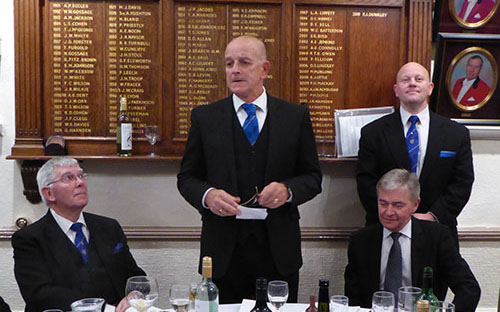 Graham responds to the toast to his health.

Alms were collected and the WM called on the secretary to present any communications from grand lodge and on this occasion there were none. The retiring procession was formed and Tony Harrison and the team retired.

After further communications and lodge business was completed, it was closed in due form so that the brethren and guests could retire for pre-dinner drinks and then the spoils of the festive board.

In his toast to the Provincial Grand Master, Kevin Poynton stated very clearly that in Tony we have a dedicated, hardworking leader who brings lustre to our very fine Province and they had all been delighted to witness a very fine ceremony.

In his response Tony thanked everyone for attending and said that he was really proud to be able to lead the Province and asked that everyone act as ambassadors to Masonry to ensure the succession of Masonry within the Province. 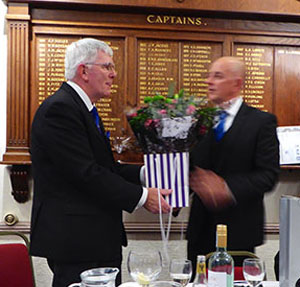 Tony presented with the bouquet of flowers.

The lodge DC Steven Williams had great pleasure in proposing the toast to the WM with whom he had worked with for many years regaling everyone with some fine anecdotes which received laughter from the brethren. The Provincial Junior Grand Warden, Paul Storrar, proposed the toast to the Provincial grand officers saying that he knew little of Derby Lodge so he looked it up on Google where he found that ‘it is a care home for the elderly’, which received applause from the brethren.

The WM presented Tony with a bouquet of flowers for his wife, some libation to ease his throat and a box of chocolates to eat on the way home! Kevin too received a bottle of liquid refreshment. The evening drew to a close when Tommy Lunt, tyler of the lodge, proposed the last toast.

It had been a wonderful ceremony performed by an installing master who had worked hard to perfect it and an evening that was enjoyed by all who had attended to witness it. 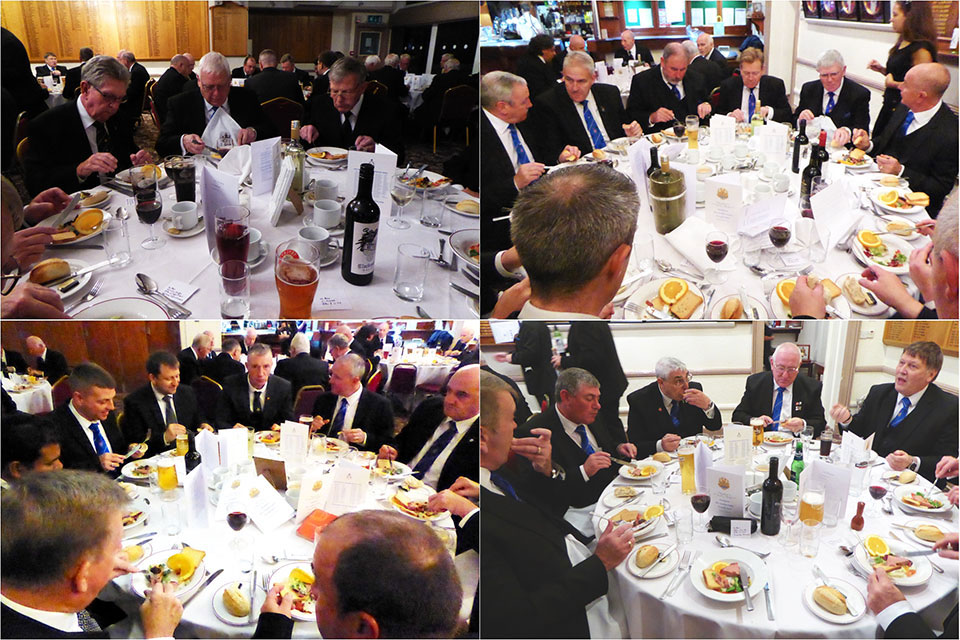 Diners at the festive banquet.