Anthony takes the chair for the second time

Brethren and guests of Olympic Lodge No 4461 which meets at Woolton Golf Club were pleased to receive as their principal guest Chairman of the Widnes Group Neil Pedder. The lodge was opened by WM Steven Cornwell in the first degree and the minutes of the last regular meeting were confirmed and signed.

The lodge director of ceremonies Robert James retired together with the Provincial deacons and on his return informed the master that Neil Pedder wished to be received. The WM had much pleasure in requesting that he be admitted and Neil was accompanied by Arthur Cregeen and Woolton Group Chairman Andrew Whittle. Salutations were offered to the grand officers and then the lodge was opened in the second degree.

Past masters were requested to assist in the ceremony and the two presenting officers, Robert James and Fred Hulse presented the master elect Anthony Standish who reaffirmed his obligation and the lodge was opened in the third degree. At this point the WM Steven Cornwell asked the officers of Olympic Lodge to line up in the north so that he could thank them for all the support they had given him during his time in the chair.

All those brethren below the rank of an installed master were requested to withdraw for a short time so that Steven could, with help from Robert James, install Anthony Standish into the chair of King Solomon according to ancient custom. 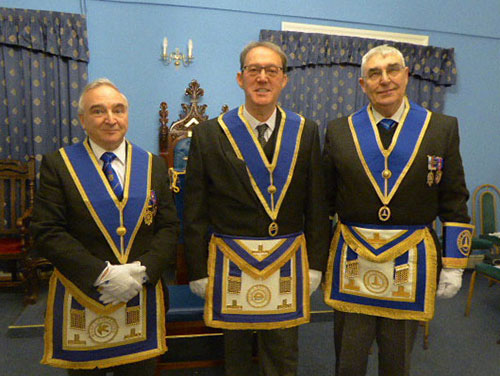 Pictured from left to right, are: Roberts James, Anthony Standish and Fred Hulse.

After the officers had been appointed and invested the newly installed master was informed that the ceremony of installation was concluded, which was the prompt for the principal guest to rise and convey the warmest of greetings to the newly installed master. Neil said that had the Provincial Grand Master Tony Harrison been present he would undoubtably have given grateful thanks for the manner in which they performed the ceremony and Robert James together with the other officers who had assisted. Neil went on to say that Tony sent fraternal greetings to all the brethren and wished that they would continue to enjoy their Freemasonry.

In response, Anthony had the pleasant task of presenting Neil with a cheque for £150, £200 having already been donated during the year, for the Masonic Charitable Foundation 2021 Festival. Neil thanked the lodge on behalf of those whose lives would be made more comfortable using the proceeds of the money donated. 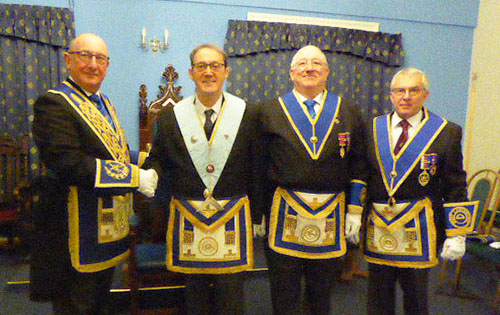 After alms had been collected Robert Graham formed the procession for the grand officers to retire and the lodge was closed with due ceremony so that everyone could retire to the dining room for pre-dinner drinks and partake of an excellent festive board.

In response to the toast to his health Neil had pleasure in thanking the WM for taking the chair for a second time, the first being in 2008, and wishing Anthony a good year in office saying that the two of them had something in common that they both started their careers doing automotive studies at Riverside College. Neil having then joined Merseyside Police and Anthony started his own business of a Saab garage. Neil thanked the installing master for an excellent ceremony which he had delivered with sincerity and deep feeling.

Before the next toast, the raffle, which had raised the sum of £145, was drawn.

The installing master proposed the toast to the WM saying that he remembered how good Anthony was at the ritual and looked forward to a happy year. In response Anthony said that the two of them are great friends and he was grateful for the support that Steven had provided. He wished to mark the occasion by presenting Steven with a bespoke plaque.

All present were in one voice agreeing that they had witnessed an excellent ceremony and had enjoyed each other’s company. And so, the evening drew to a close with the tyler proposing the last toast of the night.