Alan creamed his year in office

The Royal Suite lodge room at Woolton Golf Club was almost full to capacity to witness the WM of Anfield Lodge No 2215 Alan Ledger install his successor. In opening the lodge Alan welcomed everyone and asked that the minutes of the last regular meeting be confirmed and signed. 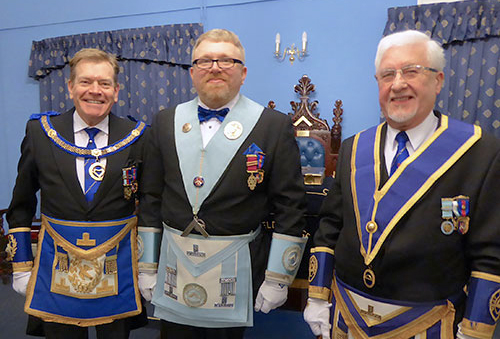 There then took place a ballot for nine joining members from Prince’s Park Lodge No 4769 which will be surrendering its warrant at its last meeting in December. The ballot proved totally in favour of the brethren and they were asked to enter the lodge to be informed the result of the ballot by Alan.

Thomas Charles Lunt who is very well known at Woolton for the hospitality he provides to the visiting dignitaries, was to become the musical director of his new lodge! Vic Albin of Prince’s Park Lodge was pleased to present his new lodge with a silver alms plate which he hoped Anfield Lodge would use and, in so doing, remind the members of Prince’s Park Lodge of happy bygone days. Alan was pleased to accept the plate on behalf of the lodge and said it would be used with pride.

A further proposition had been put forward by group chairman Andrew Whittle and seconded by Gary Devlin that Anfield Lodge become a founding member of the Federation of Football Lodges. This was carried unanimously. 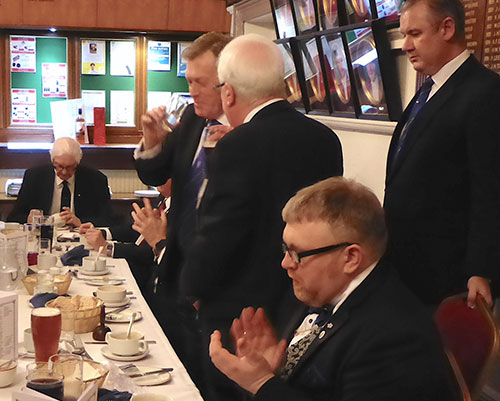 The lodge was opened to the second and third degrees and the Provincial Deputy Grand Director of Ceremonies Ian Halsall announced that Assistant Provincial Grand Master Kevin Poynton stood outside and demanded admission. Kevin, accompanied by other grand and acting Provincial grand officers entered the lodge and was warmly welcomed by Alan.

When all were comfortably seated, Alan had immense pleasure in presenting Kevin with a cheque for £600 which Alan and his good lady Louise had raised at their Ladies Evening, which was a highly popular and enjoyable evening. Kevin thanked Alan and his wife for their generosity and said that the recipients of the money would be very grateful. The cheque was to be forwarded to the Alzheimer’s Society.

Ian Halsall led the salutations to Kevin, followed by those to grand officer Fred Hunter, whilst those to Provincial grand officers were received by Vic Albin.

The lodge was adjourned to the second degree and Alan asked some of the past masters to assist him in the rest of the ceremony. This allowed the current senior warden Eric George Carroll, who had previously been in the chair in 1993, to be presented by his brother-in-law David Ireland and Andrew Whittle for installation. Eric, having been presented, reaffirmed his obligation and took his seat whilst the brethren of the lodge were thanked by Alan for making his year such a memorable one as it had been a very busy year. The lodge was adjourned to the third degree to enable Eric to be installed into the chair of King Solomon, the ceremony being conducted by Alan with great dignity, confidence and sincerity. 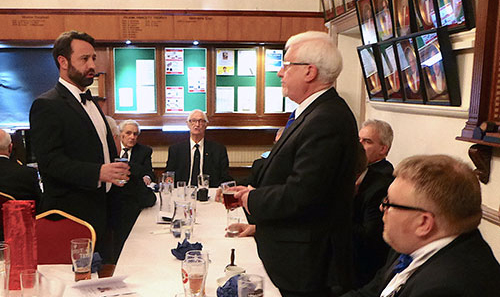 The newly installed WM Eric Carroll was asked to appoint and invest his officers and was then given the master’s address by Alan; the wardens had their address provided by group vice chairman Mike Cunliffe and Kevin Poynton provided the address to the brethren of the lodge.

The ceremony of installation being concluded, Kevin rose to congratulate Eric on being installed and said that the Provincial Grand Master Tony Harrison had commanded him to thank Eric for taking the chair of King Solomon again and he was sure that if Tony had been present he would undoubtedly have congratulated Alan for the magnificent manner in which he had conducted the ceremony, along with the brethren who had presented the working tools. As Kevin was about to resume his seat Eric had much pleasure in presenting him with a receipt from the Masonic Charitable Foundation 2021 Festival for the sum of £500 which had already been deposited in the scheme. Again, it was with great pleasure that Kevin accepted the money saying that the lives of those who would receive benefit from it would be greatly enhanced.

Alms were collected and the secretary reported that there were no communications from Grand Lodge and this allowed Ian Halsall to form the procession to retire. Once the grand and acting Provincial grand officers had retired, the other risings took place along with some private lodge business, after which the lodge was closed in due form so that the brethren could retire to the dining room for pre-dinner drinks.

Before the brethren could take their seats, Kevin proposed a toast to the newly installed master and the hard-working installing master. Alan at this point looked relieved; and so he should as he had conducted an exemplary ceremony, a culmination of a hard-worked year in office.

During dinner a raffle was held which raised £176 for charity.

In response to the toast to his health, Kevin said that he was delighted to be accompanied by the many grand officers and especially the acting Provincial grand officers and the ever-watchful Provincial Deputy Grand Director of Ceremonies Ian Halsall. Kevin informed the brethren that the Masonic Charitable Foundation had raised £48,000,000 to date for distribution to Masonic and non-Masonic causes and that Freemasons had donated 5,000,000 hours of their time. Once again Kevin congratulated Alan for providing a heartfelt and genuine ceremony and his magnificent donation of £600.

Mike Tattersall sang the master’s song and after a couple more toasts the tyler Brian Jones proposed the last toast. All the brethren had had a truly enjoyable evening.

The diners enjoy a hearty festive board.