On a cold December evening the brethren and guests of Prince’s Park Lodge No 4769 met at the Geoffrey Hirst Masonic Suite at Woolton Golf Club for the last time.

Almost all the remaining brethren of the lodge.

The lodge received its warrant on 13 July 1925 and was consecrated on 26 November 1925 and has been for many years a staunch supporter of the Masonic charities, being a Gold Patron of the 175 Years Anniversary Fund, Grand Patron of the New Masonic Samaritan Fund 2010 Festival. It has also strongly supported the Masonic Charitable Foundation 2021 Festival, achieving full patronage on this, their last meeting. 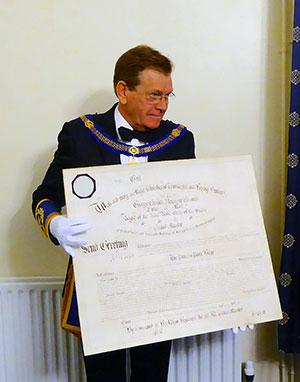 Kevin stands by the entrance to the lodge as brethren leave.

Over the years the lodge has seen its membership decline and it was with heavy hearts that the 13 remaining members took the decision earlier in the year to surrender their warrant. But all is not lost for all the brethren have joined, or are about to join other lodges so as to continue their Freemasonry which has been so dear to them over the years.

The WM Geoffrey Cowan, accompanied by his wardens proudly processed into the lodge and with great dignity Geoffrey opened the lodge to the first degree. The minutes of the last regular meeting held were confirmed and signed. Geoffrey then offered the gavel of the lodge to Assistant Provincial Grand Master Kevin Poynton, who accepted but quickly returned it.

Kevin then had the extremely pleasant duty of presenting the WM and brethren of the lodge with the certificate achieved by becoming Vice Patron of the MCF 2021 Festival. This was received with much acclaim as a tribute to the efforts the brethren had made in raising the money.

The lodge treasurer presented the balance sheet of the lodge which was unanimously accepted. Following a proposition which had been put forward two months earlier the lodge declared the disposal of any residual lodge funds, giving £1,000 to Tithebarn; £1,870 to the Freemasons’ Grand Charity and £1,870 to the West Lancashire Freemasons’ Charity. This brought Kevin to his feet once again in order to present the lodge with its full Patronage Certificate for the MCF 2021 Festival, assuring the brethren that the money would all go to good causes, both Masonic and non-Masonic.

After reports had been made by the charity steward and lodge almoner, the lodge secretary Victor George Albin had pleasure in reminding the brethren of some of the highlights of the lodge history. Vic’s ‘Brief memory moments’ can be read by clicking here. 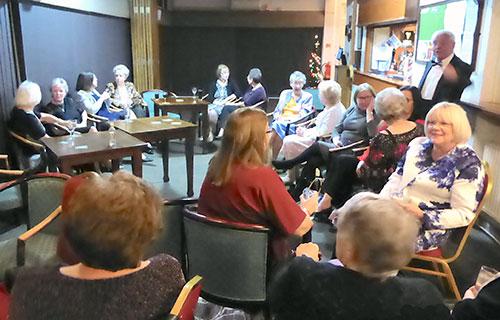 The ladies wait for the brethren to join them in the bar.

Assistant Provincial Grand Master Kevin Poynton asked the usual questions of the lodge treasurer before final closure could take place and all was found to be in good order.

The WM rose for the first time to take communications from grand lodge and said that he had received a grand lodge certificate for brother Mark Edwards; this was presented to him by Kevin Poynton who enquired of him where he would be attending in the future. Mark said he was joining Olympic Lodge No 4461, also of the Woolton Group and Kevin informed him that it was likely that the group chairman Andrew Whittle would attend and provide Mark with a fuller explanation of the certificate which he had duly signed.

After further communications Kevin requested the WM to close the lodge and hand him the warrant of the lodge. Kevin stood by the entrance to the lodge, holding the certificate as the brethren, all with a heavy heart, retired from the temple. The last one to leave was the secretary Vic Albin.

As a festive board could not be held, the brethren had decided that they would hold a private, intimate ‘ladies to dine’ Christmas dinner.

The brethren of Prince’s Park Lodge have all joined other lodges so that the happiness of the lodge and its members will not be lost. 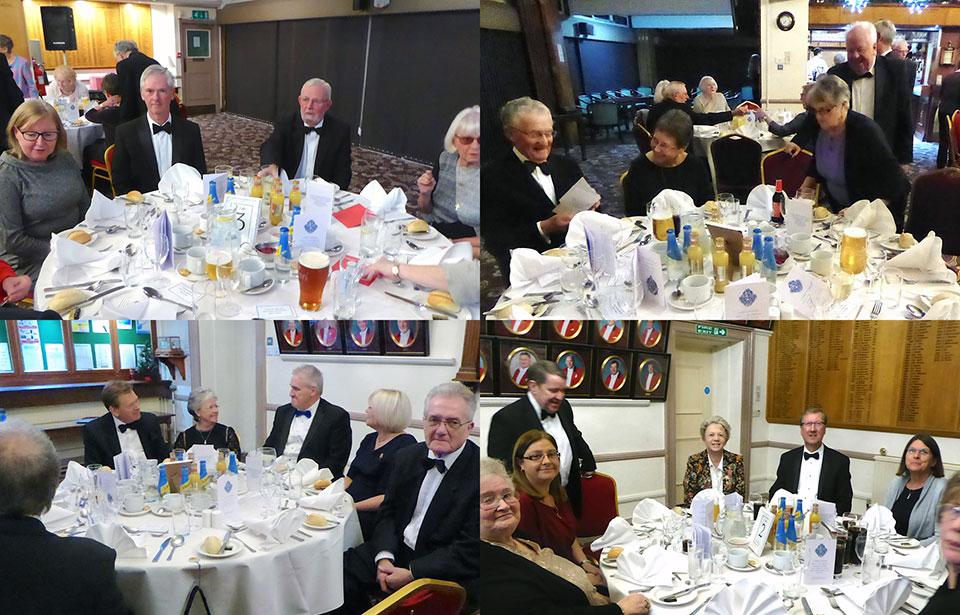 The diners remained in good spirit.