A very special initiation at Toxteth

It was wonderful to see so many Masons attend a special and emotional initiation at Toxteth Lodge No 1356, meeting in the Geoffrey Hirst Masonic Suite at Woolton Golf Club. Over 30 visitors had come to welcome a new Mason, one who had been awarded the Military Cross. 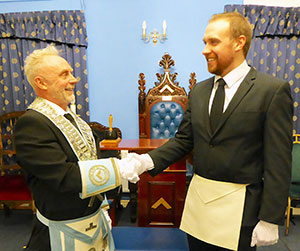 The WM Stephen Robinson accompanied by acting senior warden Eric Binks and junior warden Ian Folksman entered the lodge led in by tyler John Hibbert. The principal officers took their seats and Stephen opened the lodge to the first degree. The minutes of the previous installation meeting were confirmed and Ian Folksman who had been unable to attend was appointed and collared as junior warden.

Each of the three visiting masters of other lodges was admitted, these being the master of Old Lerpoolian Lodge No 9270, Derby Lodge No 724 and Woodend Epworth Lodge No 5381. Stephen read out the next item on the summons – ‘to ballot for and if successful initiate Harry Thomas Robinson’. The ballot proved unanimously in favour and the secretary and treasurer attended upon the candidate. On their return they informed Stephen that the candidate had signed the declaration and paid the necessary fees.

The candidate, Harry, was prepared by the tyler John Hibbert and was admitted into the lodge accompanied by the senior and junior deacons. Harry took his obligation and Stephen then asked Matt Wilson to assist for the remainder of the ceremony. Matt assumed the chair of King Solomon and the ceremony proceeded with the explanation of the first degree working tools being competently delivered by the junior warden Ian Folksman. 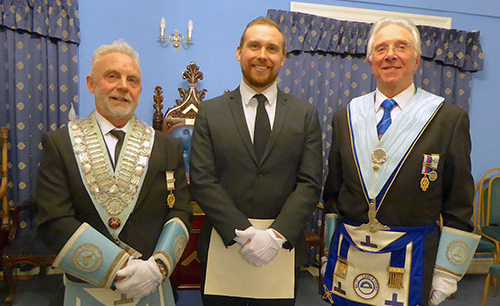 The charge after initiation was delivered by the acting senior warden Eric Binks and Harry retired to restore himself to his former comforts. Matt Wilson thanked Stephen for allowing him the honour to assist in the ceremony and requested that he resume his rightful place.

Harry Robinson was readmitted and the group mentor, Ian McGovern, welcomed him into Freemasonry and in particular the Woolton Group, explaining that Toxteth Lodge would be his mother lodge. Ian presented Harry with a USB drive on which he could follow the evening’s ceremony and make a daily advancement in Masonic knowledge.

The collection for charity having been honoured during the ceremony, Stephen rose for the first time to ask if there were any communications from Grand Lodge, of which there were none. After the second rising the director of ceremonies asked that the visitors and Provincial grand officers retire so that some private business of the lodge could be conducted.

The business of the evening being ended, Stephen closed the lodge so that everyone could retire to the dining room for pre-dinner drinks and then enjoy the splendours of a hearty meal and continue to welcome their newly made brother.

Prior to the commencement of the evening, Harry was asked why he wanted to join Freemasonry and he responded that one of his work colleagues had mentioned Freemasonry to him and that he had become intrigued about the brotherhood and charity work that Freemasons carried out.

As stated earlier, Harry, a Royal Marine medic, is the holder of the Military Cross which was presented to him by The Princess Royal at Buckingham Palace in May 2014 during his service as a Royal Marine medic. He was awarded the distinction for his actions during an attack by a rogue member of the Afghan National Army in the Nahr-e Saraj district of Helmand Province which left one British soldier dead and six injured. 24-year-old Harry helped the injured despite being shot at by the gunman. The full story can be read in the accompanying copy of his citation by clicking here. 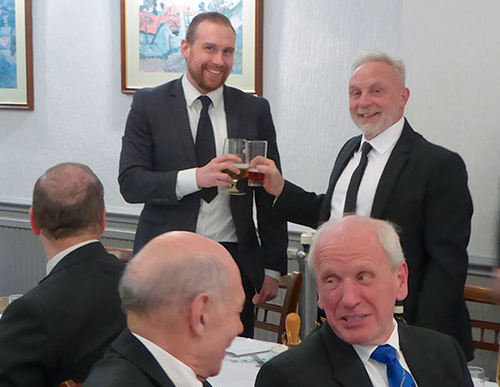 To further honour him and seven others who received the Military Cross, in April 2019 the opening of a new Armed Forces medical training facility at DMS Whittington near Lichfield, a newly built military hospital, saw its classrooms named after eight recipients of the Military Cross, Harry being one of them.

During the toast to his health, father Stephen said how proud he was of his son and never thought that Harry would make such an impact as he had not really enjoyed education and it seemed ironic that a classroom was named after him. Stephen also recalled another amusing story. Harry had phoned home and told his dad that he had been given tickets for the Buckingham Palace Garden Party. Dad was naturally delighted and mum set about looking for a new hat. Some time later, Harry’s dad asked when the garden party was to take place and Harry replied that he didn’t think they would be interested so had given the tickets to a colleague! 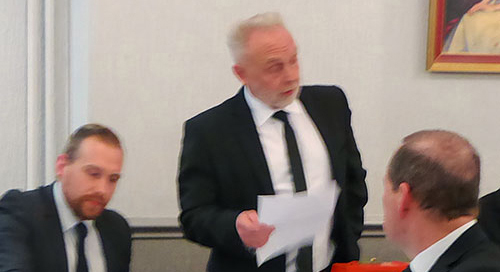 Stephen had received permission from Harry to read out the citation after which Harry received a standing ovation from all present.

After an excellent meal and a very enjoyable evening the tyler John Hibbert proposed the final toast and everyone then departed for home.