The members of De Grey and Ripon Chapter No 1356 held their annual installation ceremony at Woolton Golf Club and the principals extended a warm and friendly welcome to the companions and guests. 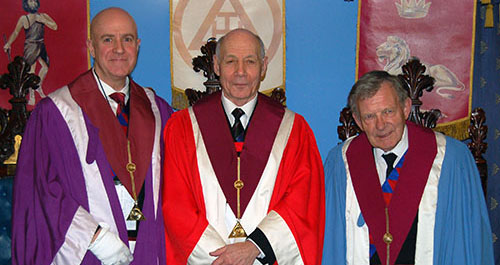 Pictured from left to right, are; Steven Williams, Albert Hogg and David Colling.

The chapter was opened by the three principals, first principal Albert Hogg assisted by second principal Steven Williams and third principal David Colling. The regular business of the chapter was soon completed and the companions were ready to receive the principal guest, Chairman of Gladstone Group John James, representing the Grand Superintendent Tony Harrison.

John was announced by the chapter’s director of ceremonies Peter Dodd and the usual formalities were observed with John entering the chapter accompanied by the Chairman of Woolton Group Andrew Whittle, grand officer John Lee and acting Provincial grand officer Bill Carter.

The three principals arose and extended a very warm welcome to John and the ceremony of installation commenced. Matthew Wilson was honoured to take the third principal’s chair, Mike Cunliffe that of the second principal and Albert Hogg remained in the first principal’s chair.

Steven Williams was installed as first principal and David Colling was installed as second principal. Third principal elect Stephen White was on holiday and will therefore be installed at the next convocation. As neither of the principals’ elect had held their impending offices before, they were each installed in full form after which they invested their officers for the coming year.

The scripture readings for the principals were given by Michael Cunliffe and Andrew Whittle. The robe addresses were performed to a high standard; that of the scarlet robe being presented by Albert Hogg and that of the purple by Stephen Williams. Peter Dodd gave the address to the three principals; Harry France addressed the officers and John James gave the address to the companions of the chapter.

On the conclusion of the ceremony, John expressed the best wishes of the Grand Superintendent to the principals. He also congratulated all the companions that took part in the installation ceremony. John was then presented with a cheque for £300 on behalf of the chapter to the Masonic Charitable Foundation 2021 Festival. John thanked the chapter for their generous donation. The business of the chapter completed, the chapter was closed and all retired to the festive board.

At the festive board John responded to the toast to the grand officers by thanking the chapter’s scribe Ezra, Bill Carter, for his help in providing the background information that made his visit to the chapter such a pleasant one.

At the festive board.

John moved on to recruitment and retention saying that it was particularly important that new members to the chapter were looked after and included in performing ritual whenever possible. He added that newer companions needed assistance to understand the Royal Arch and urged the companions to log on to the online learning resource Solomon which will help in the dally advancement in the Craft and Royal Arch.